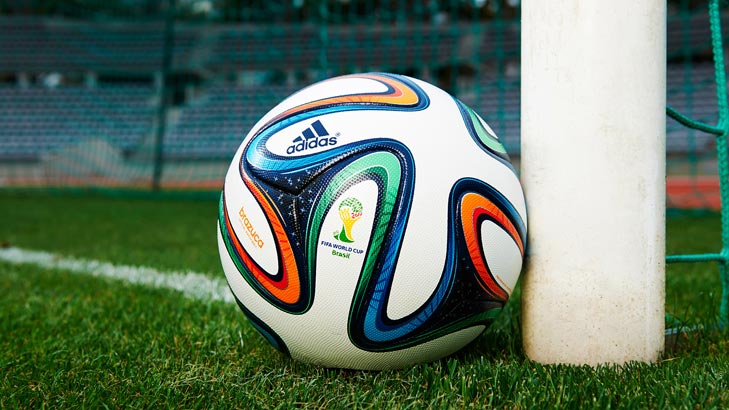 Tech geeks aren’t always the biggest sports fans, but even we can get pretty excited about an event like the World Cup.

Tech geeks aren’t always the biggest sports fans, but even we can get pretty excited about an event like the World Cup. Besides the suspense and spectacle of the games themselves, there’s something stirring about watching a truly global event, something you know the rest of the world is watching too. It’s hard to determine exact numbers for global television viewership, but the best estimates make a strong case that the final game of the 2010 World Cup was the most watched event in human history, the one time more of us watched the same thing, at the same time.

But soccer means different things to different people, and that too has an appeal for mobile designers—both soccer and mobile are global frameworks that give rise to an infinite variety of local meanings. The rules of soccer are the same across the world, but are experienced differently everywhere. You can see it clearly in the goal celebrations – when Algeria scored against Belgium last week the team gathered on the sideline and together bowed towards Mecca. When Colombia scored their first goal against Greece they had their own routine, moving in unison in a joyous, samba-like dance. In the same way that soccer is a single game that mean just about anything, mobile is a way of communicating that can be used to say just about anything. This is part of why the World Cup can captivate even the least athletically inclined mobile designers: we work every day to craft mobile strategies that connect the world in new ways, and the World Cup is a truly epic display of that connectedness, in all of its complexity and all of its vibrancy.

Even as we hop on the bandwagon, techies we remain. We can’t help thinking about the World Cup in terms of mobile and sharing some of the ways that new technologies have changed the game over the four World Cups that we’ve been in the businesses. We came up with five big ways that mobile has left its mark on the global game.

Mobile Has Changed How We Watch

This one is pretty obvious: mobile devices are now a big part of how we watch the game. A recent Harris Poll found that over a third of World Cup viewers will be looking up stats on players or teams during World Cup matches, and 12% also said they would post to social media during games, and that was higher among the younger crowd. That number was one in four for 18-24 year olds, a sign of things to come. 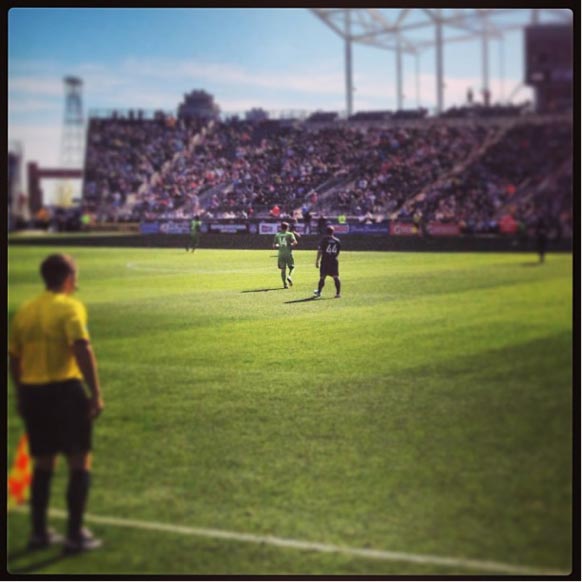 ESPN is using this year’s World Cup to push their Watch ESPN app, which aims to make the experience of watching sports something fans can engage in from anywhere. Other global media outlets like the BBC, Telemundo, and Al Jazeera are introducing their own mobile-oriented coverage and apps for the World Cup.

Mobile Has Also Changed What We Watch

We haven’t just found more ways to watch soccer over the years; we’ve found more to watch. The combination of social media platforms like Twitter, Facebook, and Instagram and internet connected mobile devices has made it possible for players, coaches, and commentators to independently share news, images, and opinions about what happens on and off the field. Some of this is truly quality. The international sports press now has a whole new body of information with which to analyze the game, and new modes of communicating it—it’s common to see tweets quoted in match previews and postgame summaries, and every sports journalist gives live updates during games.

Journalists have even launched their careers by making new kinds of analysis available. The journalist Michael Cox (@Zonal_Marking) made his name by blogging about soccer tactics – something that often gets lost on layfans like us. The new connectivity can be dangerous too. Instant access to a huge audience also gives us a glimpse of the uglier side of the game, letting us see conflicts that were previously behind the scenes. One example might be familiar to U.S. fans – when the U.S. National Team’s coach Jurgen Klinsmann decided to cut Landon Donovan, his team’s most famous and experienced player, Klinsmann’s 17-year old son sent a jeering tweet about Donovan that had his dad scrambling to apologize.

Mobile Has Changed How We Understand the Game

Instant access to data has had a big impact on how we watch and talk about sports. An open game like soccer is lighter on number crunching than stats-heavy, higher scoring American sports like basketball, baseball, and football, but the past few World Cups have seen the development of quality websites and apps that are bringing numbers to bear on the game in new ways. Nate Silver is using statistics to analyze the World Cup at his Five Thirty Eight blog. (Silver is currently giving Brazil a stunning 39% chance of winning it all—seems mighty high to us.) FourFourTwo Stats Zone is another favorite. The site provides real-time analysis of incredibly thorough data for every match of the World Cup. Beyond the basic indicators like time of possession and shots on goal, FourFourTwo has pass completion percentages for every player broken down into 19 categories. Be warned: this is a number nerd’s heaven, and might change how you watch the game.

Mobile is Even Changing How the Game is Played.

Changing the rules of the World Cup is a big deal, and this year marks the first time that any external video technology will be used to help referees make decisions. Without mobile, it’s unlikely the change would have been made. Goal line technology is being used in this World Cup to determine whether a ball has fully crossed the line of the goal. The biggest debate about the introduction of technology was disrupting the flow of the game. Reviewing video makes sense in a stop and go game like football, but in a game of constant play like soccer, long pauses to review video would change the experience. For the 2014 World Cup, the referee’s watch is digitally connected to a system of cameras that will monitor the goal line, and cause his watch to vibrate anytime the ball crosses all the way over. 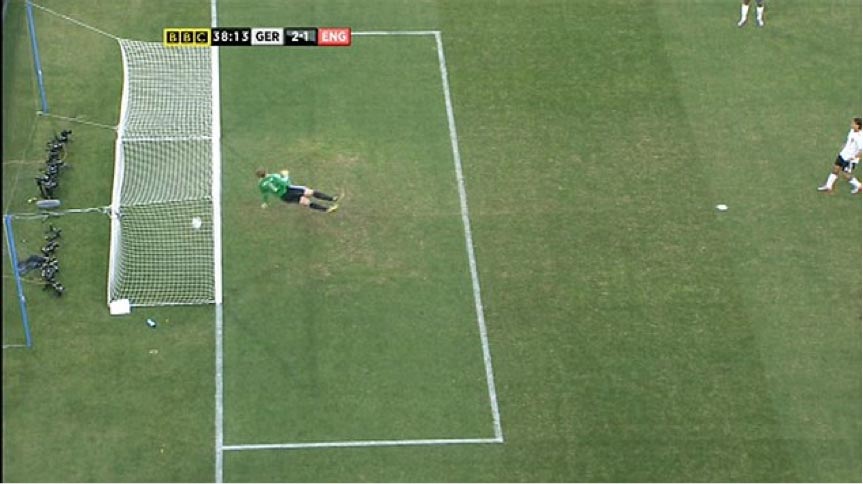 Frank Lampard’s goal for England in the 2010 World Cup was missed by the referee and helped bring goal line technology into the game.

Mobile Has Changed How We Remember

The feedback loop of mobile access has an effect on how we remember the tournament. Anyone can appreciate highlights like this stunning header or this awesome strike, and in the mobile era those moments can be replayed from anywhere. 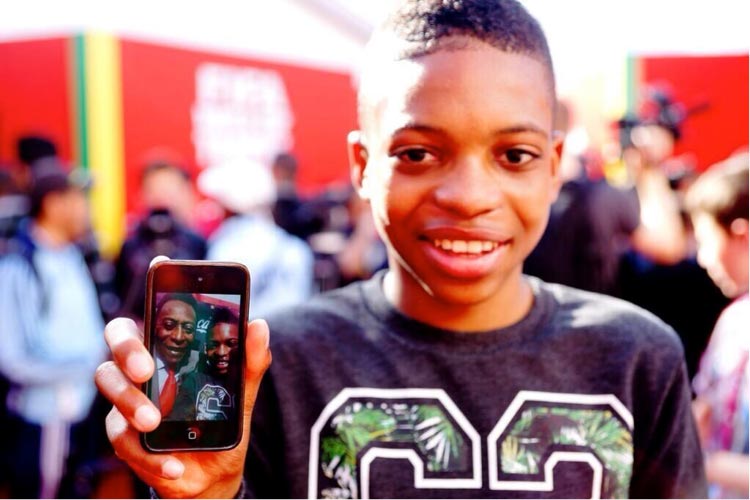 Smartphones also do their own recording, and can help us see the highlights in new ways, revealing fan footage of famous goals and big moments, like this great clip of Lionel Messi’s winner for Argentina in their match against Iran. Phone cameras have also made it possible to see incredible moments from leagues that would otherwise receive little media attention, like this crazy goal from the Finnish second division.

Twenty years ago watching sports meant looking at the screen. Now, the rise of mobile is turning spectatorship into an activity, letting us interact with the screen, and giving us new tools to understand, interpret, and appreciate the beautiful game.