Learn about the most important advancements in consumer electronics that lead to the current state of mobile technology.

When writing a post that spans a lot of time, the most important choice is where to start. Obviously the evolution of mobile technology goes back to the first computer, calculator, pencil, abacus, the wheel and probably fire. We don’t need to spend too much time on the super obvious stuff. I decided to start with the consumer electronics revolution.

Let’s fast forward to the point where it became inevitable that nearly everyone would eventually need a computer to be a functional part of society. Mobile technology is, after all, just computer technology that is easier to manage and use. What were the most important advancements in consumer electronics?

While the Mac was not the first computer it was the first computer with a graphical interface to be available to the public. The mouse peripheral was also new, previously computers could only be controlled by keyboard commands. The Macintosh was introduced in 1984 and during that Superbowl the famous “1984” commercial helped give the machine its start.

This very capable 8MHz machine could be yours for only $1995 ($4,473.04 in 2013). The Macintosh attracted many users who were originally intimidated or uninterested in a text-based interface. It isn’t important that Apple made this machine, what is important is the user interface which made it accessible to a much larger group of people. This machine, and those that followed, would set the stage for considerable innovation in the mobile technology field for years to come.

This was Microsoft’s first successful (the first two iterations fell a bit flat) graphic user interface (GUI) system set to compete with Apple’s Macintosh. At this point it was very clear that GUI are a must in all future consumer devices. It made computers accessible to people other than just computer geeks. Exactly that, is showcased in one of the early advertisements:

Learn about the capabilities of Windows 3 just for fun:

Microsoft licensed Windows and Apple quickly started losing market share to Windows-equipped competitors with cheaper hardware like IBM and Compaq. Apple began fading into the background of computer manufacturing as Windows took over the business world. Spoiler alert: Apple will be back.

The busy bees at Microsoft didn’t stop at a desktop operating system. They also created Windows CE, a self-contained solution for embedded systems. It is a bit like Android before there was Android. It was primarily built to run simplified Windows applications in the erupting hand-held market. Since then, Windows CE has evolved to run on a huge variety of devices and is still in use today. Many people have no idea what CE even is, but chances are they have had many run-ins with it throughout their lives. It was the precursor to many mobile system to come. It is used in scanners, gps devices, automobiles and various other electronics. 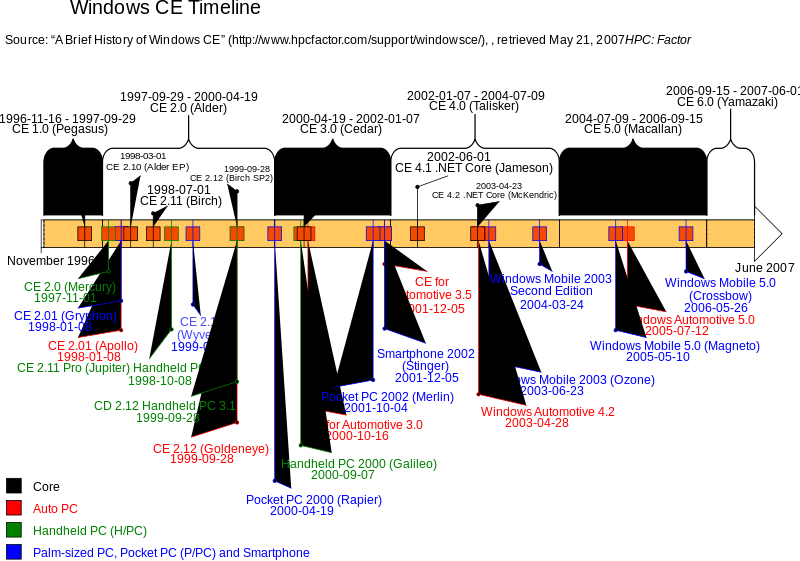 The IBM Simon was the first smartphone, released in 1994. However, few people have ever heard of it because of its poor sales and circulation. The Simon sold only 50,000 units in its entire shelf-life. Other companies tried to enter the handheld PDA arena: AT&T with the EO, Casio with the Zoomer, Apple with Newton and Microsoft with PocketPC, but all of them came before their time and failed.

The Palm Pilot was the first successful PDA. Palm sold over 1 million Pilots in the first 18 months of release. Although that sounds like a joke now, in 1996 Palm consumed 70% of the handheld market in the United States. Palm released a series of Pilot PDAs, and then moved on to the Treo which actually had telephone capabilities.

There is plenty of debate on why exactly Palm didn’t remain a leader in the handheld/smartphone field, poor management, failure to evolve, poor software, maybe a bit of everything; but it stayed around long enough to prove that the mobile landscape is viable. 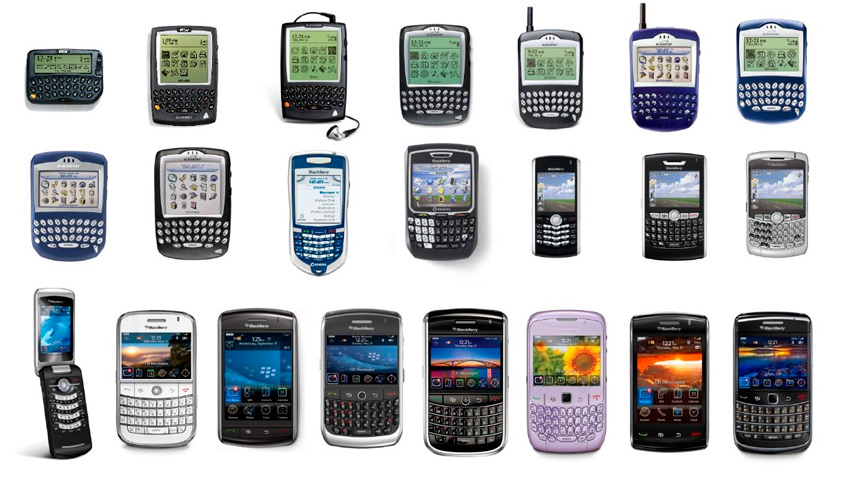 The first BlackBerry was a two-way pager with a relatively large keyboard. It gained marketshare and popularity among business professional by focusing on email services. Even more than the Palm, this device paved the way for modern smartphones.

The BlackBerry infiltrated the business world and converted that large and important segment of people into avid mobile users. There was a business need for connectedness even when away from the office. People really started to feel like they couldn’t function with out it, so it became a part of their lifestyle.

Advancements in mobile were not just phones and PDAs, Apple introduced a new music player in 2001.

Although it didn’t really take off until about 2005, there is no doubt that iPod was a game changer. iPod met every consumer need: it fit in your pocket, it could hold all of your music, it was easy to use and it had a reasonable price tag. The iPod is arguably the first mobile device that nearly everyone could see the value in. It was simple to understand, and even easier to explain. All of these benefits helped the iPod sell over 350 million units as of 2012.

Who can forget these memorable ads?

Not everyone wanted a PDA or cell phone. Many people didn’t see the need to be connected all the time. But nearly everyone had some form of mobile music player. If you were in the market for a music player, it was very hard to make a case for anything other than an iPod for quite a long time.

Being a web developer was no longer necessary to create content for the web. Facebook, Twitter, MySpace, YouTube, Wikipedia, Blogger and many more, created a critical mass of content outlets for users. Suddenly sharing photos, videos, and social posting became fast and easy. People had more reasons than ever to be connected, they wanted mobile internet.

After many rumors and much speculation Apple finally released its phone. The financial success of the iPhone hardly needs to be pointed out but just to put it into perspective ~330 million iPhones have been sold from 2007-2013. iPhone incorporated all of the benefits of a PDA, phone, and music player into one beautiful device. Heck, it even had a decent camera! The device was so revolutionary and all-encompassing the advertising team had to work pretty hard to help people realize how much power they had.

Even though mobile devices have been around for many years by now, none of them clicked like the iPhone did. Like the iPod before it, iPhone was accessible to everyone.

Google was on Apple’s heels entering the marketplace less than a year later with the HTC Dream. Once the first competitor entered the market the floodgates opened and hundreds of manufacturers began creating Android devices. Carrier plans made the devices affordable. Mobile music players and portable cameras were rolled into mobile phone offerings.

Today it is all but assumed that you have a smartphone. Everyone has access to the internet at all time. Both app stores have thousands of applications.

Today we find ourselves in the era of wearables. You can’t look at tech-news sites without seeing multiple stories about some kind of new smart watch, smart band, eye piece, or heart rate monitor coming out. The field has yet to be proven, but that isn’t stopping many from diving in. Some of the established players are Google Glass, FitBit, Nike Fuel Band and Pebble.

Even with their limited releases wearables have already gathered a strong following, and they make impressive promises. The ability to measure everything from caloric intake to sleep patterns can help people greatly improve health and fitness. Having a GPS chip in nearly everything will greatly reduce theft and provide valuable data to both users and companies. Hands-free devices like glass and watches will make interfacing with the online world easier than ever. 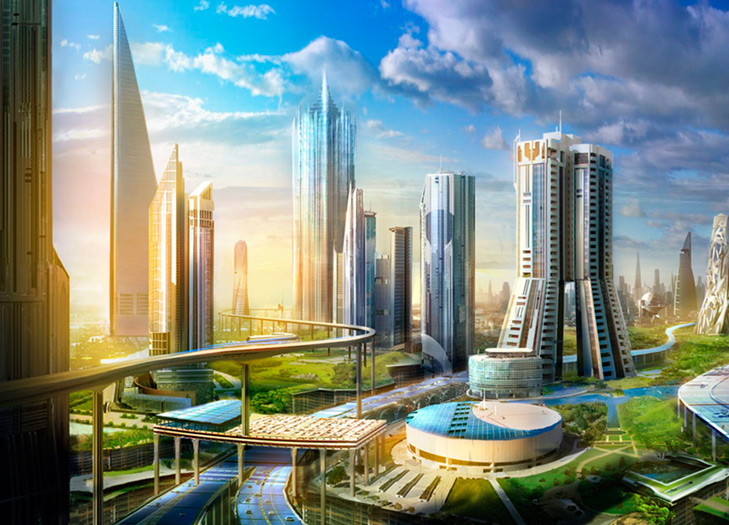 Saying “the Future” almost feels misleading considering the speed of current innovation. It’s difficult to predict what mobile technology will be like just in the next 5 years, before even considering “the future.” There are many technologies that are primed for a breakthrough like NFC, Virtual Reality and motion control. Other technologies we haven’t even thought of yet are probably going to take the world by storm. It is important than ever to keep listening, keep learning, keep an open mind, and try to keep up.