DevOps Metrics and KPIs: Pave the Way to Better Performance

At MentorMate, we strongly believe in monitoring DevOps metrics and investing in their development. But, what metrics should you track to ensure success?

DevOps metrics are important for two main reasons. First of all, they give us information about how well we cope with the way we are doing DevOps. Secondly, they are good indicators for what we can do better. In other words, they help us make data-driven decisions to improve our work.

SDO performance refers to the four DevOps metrics. We support the main industry-standard DevOps metrics, which show how well the team performs in its field.

Generally, there are four types of DevOps metrics that we measure — deployment frequency, lead time for changes, time to restore service, and change failure rate.

According to their findings, elite organizations deploy code multiple times per day. They routinely deploy on-demand. These results are consistent for this elite group over the last several years.

On the other end of the statistics spectrum, low performers deploy between two to twelve times per year. This result shows a decrease in performance in comparison with the previous year’s results.

At MentorMate, we deploy multiple releases per day. To achieve this, Continuous Integration/Continuous Delivery (CI/CD) pipelines assist in a way to automate the software delivery process. These pipelines help remove errors and thus, allow more confidence in the product.

According to Accelerate, lead time for changes is a key metric that shows “how long it takes to go from code committed to code successfully running in production”.

The change failure rate shows how often new changes and updates to the software break or fail. In other words, “what percentage of changes to production or released to users result in degraded service (e.g., lead to service impairment or service outage) and subsequently require remediation (e.g. require a hotfix, rollback, fix forward, patch)”.

At MentorMate, we invest in automation. In this way, we’re able to decrease human error rates. We believe this leads to more predictable results and fewer failed deployments.

According to the above analysis, elite, low, medium, and high performers all execute different levels of speed and stability. However, high speed and strong stability are both possible at the same time.

We have also observed that when a company journeys from a low performing company into one that is high performing, the main metrics tend to get worse initially. This is mainly because the old way of doing things goes away and in its place comes the new way. This usually leads to initial chaos until things stabilize again.

Looking at these metrics on a graph, it tends to form the letter “J”. First, the metrics decline and then comes a rapid improvement in the results.

There are several ways in which this culture of psychological safety affects the SDO in a company. They can be represented as a chain, in which every piece affects the next one.

Here’s how this chain works in general and how it is reflected in MentorMate’s everyday work and values:

Psychological safety is at the top of the chain and means that team members feel secure to take risks and can be open with one another.

At MentorMate, we feel the constant support of our managers and team members and work in a highly psychologically safe environment. This is achieved by following one of our core values: integrity, which helps us build trust and be moral.

Dependability follows psychological safety and means that team members get things done on time and tasks get distributed evenly among team members. There’s no one doing most of the job on account of others.

We strongly believe in collaboration as one of our core values. We can’t achieve dependability without collaboration as it allows team members to get things done on time by means of even distribution of tasks and good cooperation and collaboration skills.

Structure and clarity refer to the ability of team members to have clear roles, goals, and responsibilities. This piece of the chain is well represented in MentorMate’s values: working intelligently and striving for results. We work intelligently which results in a clear structure of the processes and clear roles and responsibilities within the team as well as within the company as a whole.

At the same time, we set clear goals for ourselves and strive to achieve them, while remaining flexible towards our clients’ needs. Along the way, we modify processes based on those needs.

Meaning refers to the fact that team members find that their work is meaningful. MentorMate clients fall into many different industries — healthcare, education, manufacturing, finance, and agriculture to name a few. All of our projects in these fields are meaningful and leave a lasting impression and value for our clients and their users.

Impact shows that team members believe that their work is impactful, i.e. it leads to positive change in the surrounding community. MentorMate’s portfolio is not only rich in different industries, but it also impacts the community as a whole in a positive way, it matters and creates change.

That is how MentorMate has a specific approach to non-technical key elements and creates such a culture of psychological safety. Not only that, but as a consequence of the performance of the non-technical metrics, there is also an improvement in productivity and SDO performance.

At MentorMate, we believe in continuous improvement by means of investing time and efforts in automation, traceability, and monitoring. What’s more, we offer clients the whole spectrum of services: business analysis, project management, developers in the whole range of practices, as well as further support after the product release. Our aim is that the released product will be able to handle thousands of users. 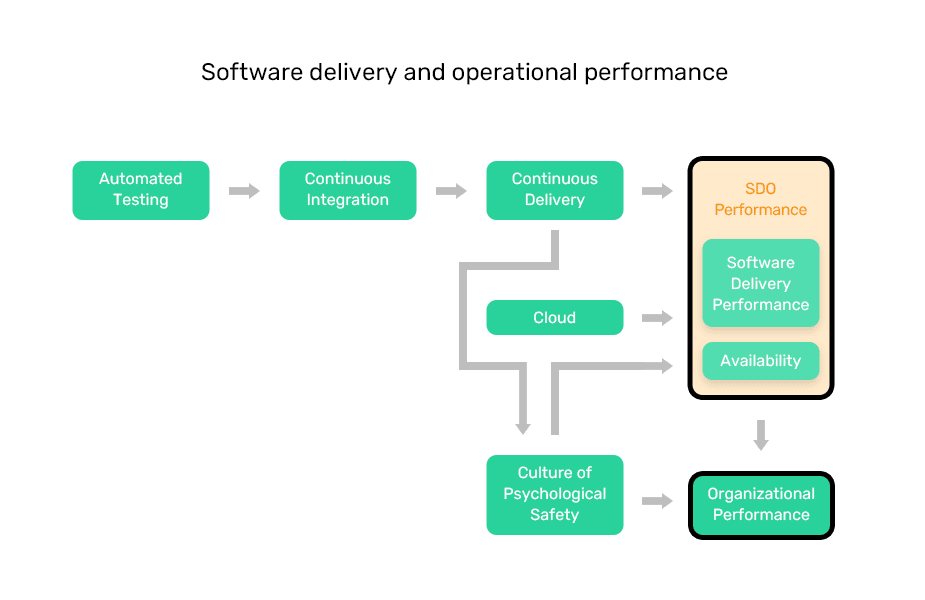 At MentorMate, we incorporate the usage of both technical and non-technical metrics in order to provide better products and services to our clients and their users. We are also investing our efforts, time, and finance in automation wherever possible. This allows us to reduce human error and achieve better results.

This post was written in collaboration with MentorMate’s Cloud & DevOps Manager Daniel Rankov.