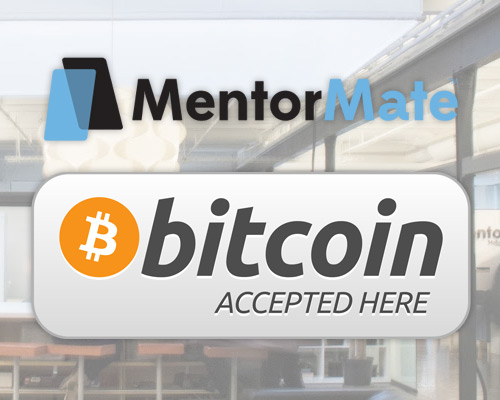 After thoughtful discussion, MentorMate is proud to be one of the first Minneapolis companies that accepts Bitcoin for our services. In the same way that we were early adopters of mobile, the lean startup mentality and the consumerization of enterprise IT, Bitcoin is heralding a new form of digital financial transactions. Supporting Bitcoin means supporting the fundamental changes occurring in society due to technology, and companies that accept Bitcoin realize that these changes will become mainstream in no time.

Bitcoin is a digital currency that allows near-instant payments from any Internet-connected device. These payments are global, with no border restrictions (apart from those imposed by law) and anonymous, meaning no third party organization knows the sender or recipient of the funds. These payments are also permanent since there is no possibility of a reversal or chargeback for any of the transactions on the network.

Digital payments have become a big deal in the last decade. With companies like Square, Google, Paypal and even Apple reportedly getting into the e-wallet and payments business, we finally have a vision of what the world can look like when we don’t need to carry around all of the green rectangles and shiny scraps of metal to represent value and effort. The thing to remember about these digital payment solutions is that they are based on the U.S. dollar. You must put your faith into both the U.S. government to not de-value the currency and in a financial institution that may disappear or sell off the business. Additionally, banks and other businesses are seeking to make money from your transactions, taking fees and profiting from the size of the network.

In contrast, with Bitcoin there is no business or central authority that controls the network. There are no fees for large transactions and negligible fees for small transactions. As the use of Bitcoin increases, the security and reliability of the currency will increase, and the already infrequent fees may actually decrease over time.

Bitcoin is a currency, like any other. If you receive income in Bitcoins, it must be reported to the government. The same would be true if your business accepted U.S. dollars or euros. Income is taxed, and large transactions are monitored (although mostly ineffectively) for money laundering. Using Bitcoins is legal in most nations and is supported by law as a mechanism for trade. Countries such as China have banned Bitcoin trading in their banks due to fears of people fleeing and destabilizing the Chinese yuan, but ownership and use of Bitcoins is completely legal, even in China.

At the time of this writing, each Bitcoin is worth $806 USD, but the currency supports at least 8 decimal places of precision, so even 0.1 Bitcoin is in some context a lot of money. Although you could get Bitcoins by trading goods or services, one of the easier ways of getting Bitcoins is to purchase them using a standard fiat currency using an exchange like Coinbase. Of course, you can also mine Bitcoin, but that isn’t something we are too interested in. Once you have purchased or received Bitcoins you are ready to send them.

Bitcoins work identically to cash, so any type of negotiation regarding providing goods and services before or after value has been delivered would happen in the same way that it has for thousands of years. With Bitcoin, the recipient provides a digital “address” to receive the funds. This address is tied to a secret key known only by the recipient. The sender uses a digital wallet application to send the specified amount of Bitcoins to the recipient’s address. This transfer will be broadcast to the network by the sender. The network will then proceed to “confirm” this transaction over the next 5-20 minutes as computers on the network agree that the transaction took place and was not fraud.

Once this transaction is complete, the entire network agrees that the recipient now has the funds, and the right to split, join or transfer funds to a new party.

If you are interested in learning more about Bitcoin, plenty of resources are available. Let us know if you would like to take advantage of this new payment method!