At MentorMate Bulgaria, MentorOpen play is a way to connect, build camaraderie, and network with the other talented IT professionals in Sofia.

MentorMate Bulgaria is our sister office in Sofia. When our coworkers aren’t busy implementing a lean UX design process or developing, they might be seen playing in a table tennis tournament known as MentorOpen.

The table tennis tournament has been around for some time and while it may belong to MentorMate now, it was originally run by another Bulgarian IT company.

However, when those responsible for the games could no longer dedicate time to running the tournament it was MentorMate’s Nikolay Nyagolov, developer and serious table tennis enthusiast, that stepped up and continued the tournament’s tradition.

“I thought it was a good idea because we wanted to continue the tournament and I really like table tennis.”

Now held by MentorMate, the tournament was given a new name: The MentorMate Open, which was then happily shortened to MentorOpen.

Every year, before the MentorOpen even starts, team MentorMate holds tryouts to determine who will represent and play against the 18 other teams from eight other tech companies. With nothing on the line (unless you’re counting honor), the companies take the games seriously. 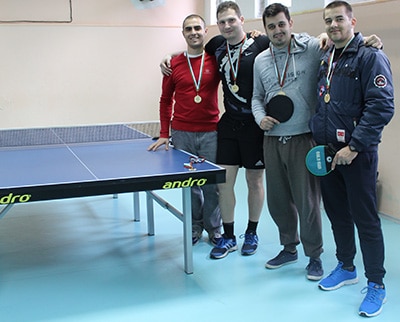 More than a game

At first glance, the tournament might seem comically serious. Teams sport logoed shorts and log hours during consistent team practices. At its core, the MentorOpen is designed to help those that work at MentorMate Bulgaria unwind.

MentorOpen is also one of many opportunities to build camaraderie in MentorMate Bulgaria. Some of the new staff members originally met through the MentorOpen games. There are also foosball games, chess tournaments and a soccer league, although they call it football. Though, the true purpose of MentorOpen isn’t to name the victors. It’s to connect.