Polymer vs Angular vs React

Polymer vs Angular vs React — one is making a leaner more effective build process and user performance possible for web apps. The question is which one?

Most developers and users won’t argue building on and maximizing the experiential capabilities of the modern web has been a slow process. When scoping a development project, clients have historically asked for native solutions citing better, more reliable performance. All that is changing, and Polymer, the open-source JavaScript library created by front-end developers working with Chrome, is making it possible.

What Is Polymer, and Why Do Web Components Matter?

Polymer, or the Polymer project, is the first library that gives developers the necessary tools and definitions to build an application via web components. Polymer benefits users and businesses. Due to the ease-of-use web components offer, developers can increase their productivity while building applications that boast better support and increased longevity.

When I was little, I loved to play with Legos. I remember it was very easy to build different houses, vehicles, farms, etc. with the same “components” / pieces. “Web components” and “Lego components” have similar behavior: Every component could live on its own and is reusable. One big component has different small subcomponents, just like every Lego house has windows, doors, rooms, etc.

Like Lego, Polymer has a vast supply of ready to use web components. The Polymer catalog has the following sections: 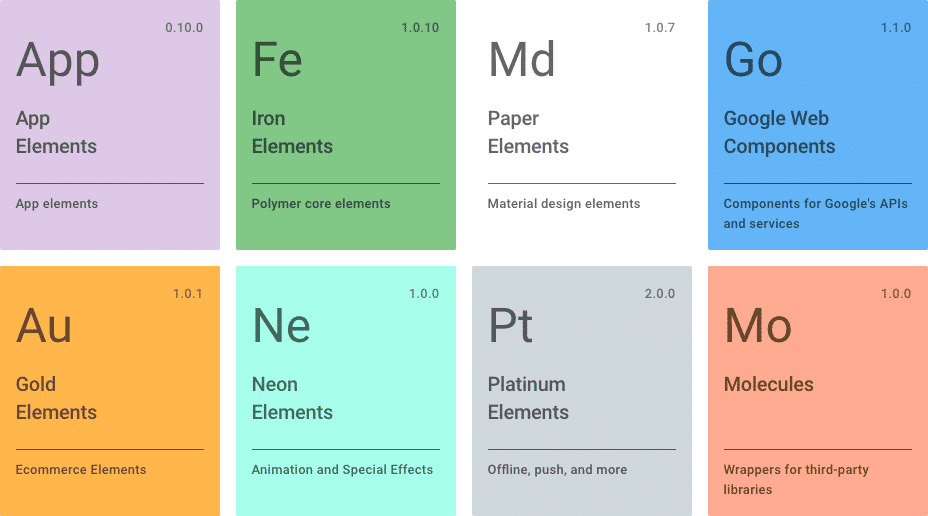 Let’s start with something very simple, a blog with a few subcomponents:

While Polymer has a rich set of web components (Polymer elements). The bower.json includes only the main library (webcomponentsjs) and several polymer elements:

Several years ago, we began work on a complex legacy system with an architecture built from .Net web forms, jQuery and MSSQL, Server 2012.

The System Had Several Challenges:

We needed a mobile-first system with a reliable offline mode.

After several meetings with product owners, the main skeleton of the application was ready:

Ember.js is a very good framework if the REST API framework is Ruby on Rails and Ember doesn’t support Shadow DOM.

Angular does not support shadow and shady DOM was a major stumbling block. Additionally, migration between Angular 1+ and Angular 2.0 would have been painful requiring additional resources and time.

Considering the two remaining options, both had distinct advantages. React boasted a much larger community of developers than Polymer. After several meetings, our team chose Polymer. The reasons were:

Using Polymer, developers can create a custom element in a single html file which is more intuitive. It is easy to understand the component without opening several files at once: 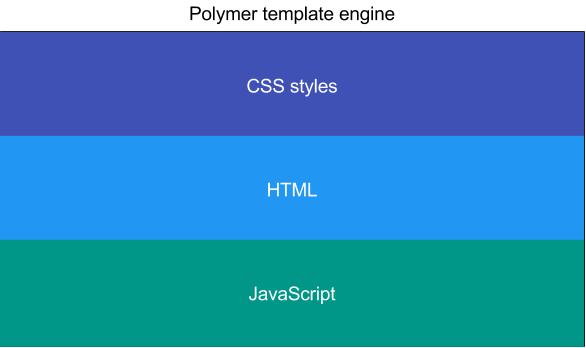 Is This Template Engine Better Rather than Angular (version 1) and React?

My opinion about the template engine is:

Note: Angular version 2 has a similar template but the necessary definitions are:

Polymer Summit 2016 shares the diagram about the using of the HTML, CSS and JavaScript between Polymer, React, Angular and Ember. 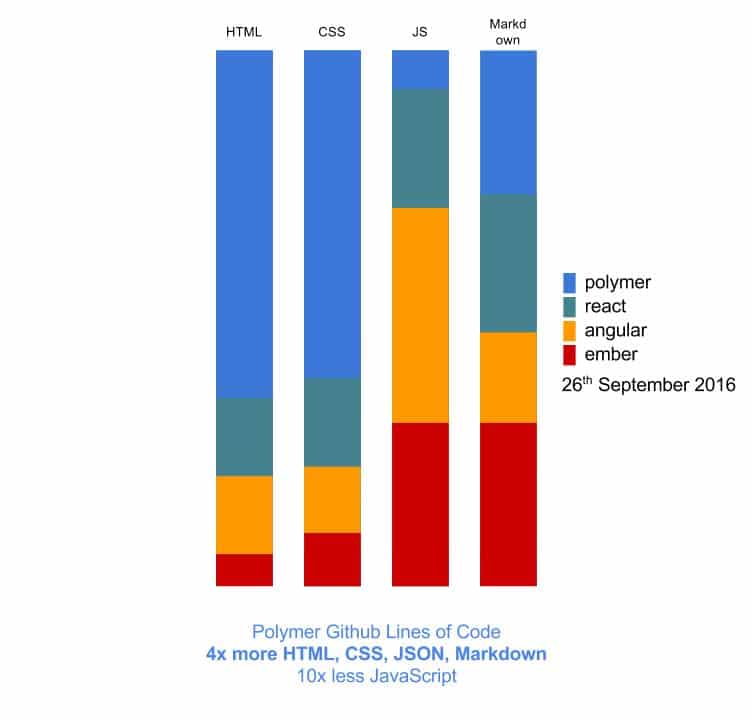 This concept is similar to:

Angular version 1 introduces complexities not beneficial for the developers or product owners. For example, Angular 1 doesn’t have clear a definition between Factory and Service: AngularJS: Service vs. provider vs. factory. The question is a part from the Stack Overflow wiki.)

When the concepts are not clear, this is a painful for the development team and critical for the application and deadlines.

Polymer has a large set of helpful behaviors:

This sets of the behaviors was a very helpful for our team and reduce the development time.

Polymer vs Angular: These features are not supported from Angular or React:

Our project required different themes with different contrast. If our choice had been Angular or React, this would have opened the door for other issues.

Advantage 4: Working with Native JavaScript Objects Is Much Easier

The polymer DOM layer is very different from jQuery DOM layer or Angular (version 1) DOM layer. (jQuery has a jquery element, and Angular has an angular element.)

The polymer DOM layer is closest to the DOM API layer.

Example with querySelectorAll() (querySelectorAll: Returns a list of the elements within the document (using depth-first pre-order traversal of the document’s nodes) that match the specified group of selectors. The object returned is a NodeList.)

— And polymer has several additional methods for selecting elements. For convenience, several utility methods are available on the Polymer element prototype:

Data binding is not a problem for Angular or React, but the story is different for DOM manipulation and element selection.

Polymer builds a map / collection with “quick” nodes (if an element has id attribute). A node specified in the element’s template with an id is stored on the this.$ hash by id.

This is huge advantage if you are a JS / DOM developer. Angular strives to provide another abstraction and dictates the view from the model / state and thus implicitly makes it harder to work directly with the DOM

“Polymer DOM manipulations are much more intuitive for frontend developers as they resemble the long ago established practices by not abstracting the DOM but instead embracing it.”

Angular / React or jQuery has more guides and examples compared to the Polymer Project. My opinion for the Polymer documentation: Polymer has a much better structure of the documentation and examples from Angular (version 1) or React. I had conversations with junior and middle-level developers about Polymer vs Angular as it related to onboarding. The overall impression is:

For us, it was incredibly important for the application being to have a good bridge / connection between d3js, Mathjax, text to speech (external modules) and other internal components. I mentioned early, Polymer doesn’t have an extra layer and sharing data between components, and d3 or Mathjax is very easy.

Example 1 application with MathJax and Polymer.

Advantage 7: The Best JavaScript Library When It Comes to Progressive Web Apps and Lazy Loading

The Polymer App Toolbox and Polymer CLI make it easy to build progressive application. This technique has a name: “PRPL Pattern“:

The blog app I created is built using the toolbox and served using the PRPL pattern and multi-view progressive web app.

The Polymer Project has a large set of custom elements:

Of course Angular, jQuery and React have a lot of third-party libraries / widgets but when we talk about the data grids, custom input elements, uploaders, icons, etc. in many cases these widgets are not free or don’t have a commercial license.

This is why many companies invest in interoperability layer: https://vaadin.com/blog/-/blogs/using-polymer-components-in-angular-2

For us, the main Polymer disadvantages are:

Looking Ahead: The Future of Polymer

The Google team is already working on the next version (Polymer version 2). The current version (Polymer version 1) is using v0 Custom Elements. v0 is supported now by Google and Safari only. Custom Elements v1 will be supported by a variety of other browsers including: Microsoft, Opera, Firefox. Developers and businesses can look forward to better performance and the reduced need for Polyfills. This step is huge for the Polymer community.

“In order to make it as easy as possible for existing Polymer components to take advantage of the v1 Web Component API’s with minimal pain, we want the 1.x => 2.0 transition to be as smooth as possible.” – Polymer team

Best Use Cases for Polymer

Of course, a silver bullet doesn’t exist. However, I would recommend the use of Polymer in the following cases:

Guide
Considering a Native App? Ask These 8 Questions First.
Blog
3 Ways to Create a Modal Window With the Angular CDK
This site is registered on wpml.org as a development site.