Healthcare has seen an exponential increase in clinical data points — some seven billion — fed by medical societies, hospitals and third-party vendors, according to speakers at a recent MentorMate event. That’s not even counting non-medical grade data generated by consumers.

This healthcare data management offers potential — but also potential danger for those who provide or seek to use it. Data can paint a highly-specific picture of a patient or population. Should an employer gain access to select health data, the financial or personal ramifications can be severe. It may prejudice them against the employee thereby limiting mobility, earning potential and workplace comfort — or a host of other yet-to-be-realized consequences. The number of possibilities for healthcare data management begs the question, “Are we maximizing and securing it?”

Lauren Smith, Policy Counsel for the Future of Privacy Forum, deconstructed the opportunities and risks for data use at a recent digital healthcare conference hosted by MentorMate:

Healthcare data management, storage and security protocols have very real implications for consumer wellbeing. Government and watchdog agencies found health apps were functioning beyond their intended purpose. According to a Scripps Research Institute professor of genomics, 12 mHealth and fitness apps tested by the FDA were delivering data to 76 third-party companies.

A report published by Privacy Rights Clearinghouse detailed additional vulnerabilities for users of health and fitness apps, which included sending unencrypted data without user knowledge and connecting to third-party sites without user permission. The report found 40% presented a high risk for users’ privacy. One study co-created by Boston Children’s Hospital and the University of Cologne in Germany, determine less than 30% of health apps available in the Google Play and iTunes store incorporated a privacy policy.

The current drug approval and prescription model represents an example of “tyranny of the mean.” Treatments are only deemed “effective” if a notable improvement is documented during clinical trials for a significant part of the population and “do no harm” to the remainder of the subjects involved in the trial, according to Kennedy. 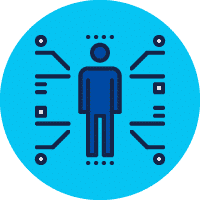 How to Reshape the Current Clinical Trial Model So Consumers Are Not Punished For Their Genomes?
Download Our Guide
In the current approval model, treatments are shelved if they mark a complete turnaround in the care of certain exceptional responders while seemingly offering little benefit to the mean, hence the tyranny of treatments that exist but aren’t being offered to the populations who would benefit the most from their use.

The precision medicine discipline argues we can learn just as much, if not more, from the outliers and tailor care not to the mean, but instead to a care consumer’s genetics, lifestyle and environment.

The Problem with Precision

At the surface level, precision medicine seems to offer no financial benefit for companies currently profiting from the creation, testing and manufacturing of pharmaceuticals. Pharma companies benefit from the largest potential population. It is more advantageous to sell prescribed treatments to millions of care consumers compared to treatments designed for “exceptional patients” who might number in the thousands.

The individuals who fail to find financial benefit for precision medicine forget screenings, to determine the efficacy of the treatment for a consumer given their genetics, lifestyle and surrounding environment, offers a secondary, lucrative revenue stream.

Population health, another school of thought, approaches creating the best outcomes while managing cost from an alternative perspective, facilitating behavior change in a large population so fewer costly procedures are required to course correct later.

In broad sweeps, population health offers the greatest benefit for the most people. What it forwards in efficiency, it lacks in personalization. By comparison, precision medicine offers the opportunity to tailor more exacting care to a smaller population. However, the potential exists to sacrifice the statistical rigor of clinical trials through a focus on outliers.

“Data in and of itself does not treat patients,”said Sheri Dodd, MSc., Vice President & General Manager, Medtronic Care Management Services. According to Dodd, data is the foundation for any shared savings program between payers and providers. But, without incentive to act, the opportunity crumbles.

Many Sizes Fit Many

President Obama introduced the Precision Medicine Initiative in 2014 with follow-up to the tune of a $215 million dollar investment in his 2016 budget. The initiative aims to enable researchers access to health records, genomic information, clinical data, hospital records and more to better understand why some patients respond better to treatments than others.

Patients Aren’t Average. Why Should Their Treatments Be?

According to Lauren Smith, the initiative represents a shift away from a “one-size-fits-all” approach to medicine and toward a new standard of care.

Some entities in the health space began taking action even before the federal edict. The Mayo Clinic created the Center for Individualized Medicine in 2013. And, precision medicine has already begun to take hold in treating select cancers (breast and lung).

Increasing the relevance and breadth of individualized care will require a concerted effort for patients to volunteer their health data along with researchers’ willingness to take the time to put healthcare data management to work.