How the Appstore Changed Software Development

The appstore has changed nearly every aspect of the application process including development, launch, search, trial, reporting, fixing, and pricing.

Long ago, in order to install apps on a computer, you had to go to a brick and mortar store and peruse aisles of boxed floppy disks or cd-roms. Consumers had to decipher an arcane list of hardware and system requirements to determine if the application they wanted to purchase would run on the computer they had at home. Return policies were stringent and unforgiving. If you went home and tried to install application only to find out your version of windows was too old or you didn’t have the necessary sound card, you were out fifty bucks and two hair pulling hours of your time.

In 2008 Apple and Google introduced specialized app stores for installing software on their smart phone operating systems. Three years later Apple copied the distribution system for OS X. These app stores revolutionized software distribution. Consumers are only presented with apps that will actually run on their smart phone or computer, they can read reviews before installing, and updates are installed automatically. Buying software is as easy as tapping your finger on a screen or a trackpad.

The ease with which a user can install or uninstall software has had an effect on how consumers perceive software. What people would once pay $70 for at Best Buy, they now are only willing to spend money in the single digits. One reviewer of a popular video game writes, “Was great but not worth more than a dollar” for a game that cost $5. People have concluded that ease of acquisition is proportional to ease of development. They think that since the opportunity cost of a software purchase is less, than so to is the development cost.

As apps have gotten smarter and more sophisticated, users have come to expect more, but they are less inclined to part with money up front. In order to fund development, software makers have devised new and novel ways of monetizing their work. In addition to in-app advertisements, we now have the freemium pricing strategy. Freemium is somewhat analogous to the shareware of the pre and early internet days. Applications are free to download, but come with a limited set of features. Advanced functionality can be had by paying money to unlock them. Game developers restrict access to levels beyond the first few until a user unlocks them for a small fee. In free to play games such as Clash of Clans, players can buy in-game gems to speed development or purchase special items. Apps like Pocket and Evernote employ freemium subscriptions. Users have access to all the functionality of the application but there are limits. Pocket allows users to save and read as many items as they want for free, but for $49 a year, users have a permanent archive of the content they store, as well as the ability to tag and search their content. Evernote Premium increases the amount of storage space for notes and pictures and also allows users to collaborate on notes, as well as enabling the ability for the app to work offline.

The app stores have also helped customers and developers communicate better about software. Though in a somewhat broken way: reviews. Users employ the review system to not just convey the merits or defects of an app, but also to request features, report bugs, and ask for support. This is somewhat frustrating for developers. On one hand, they get feedback about their work quickly and from a wide range of users without having to seek it out, but at the same time users will try to bargain their rating for their pet feature request. Other times users will rate an application poorly because they can’t find a feature or because they are having issues with some aspect of the application that isn’t a bug or a crash. To mitigate these issues, Google wisely allows application developers to respond to reviews. Not only does this contextualize a negative review so as not to influence other potential users, but it also permits developers to reach out directly to users who are having problems and provide them with support. 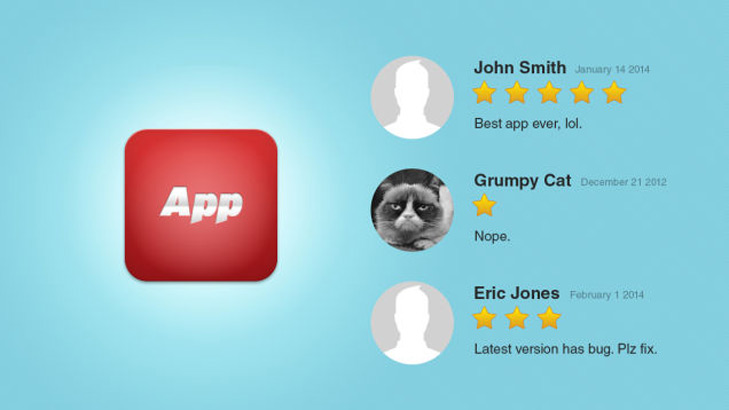 App stores have also had an effect on how software is developed and released. With the rise of agile software development methodologies and product development strategies like minimum viable product, software makers release their applications with reduced feature sets and in unfinalized states. When Ulysses III, a text editor for OS X, was released to the OS X App Store in April of 2013, many users complained about missing functionality from the previous major version. This version was a complete rewrite of the seminal text editor, but in order to ship by their deadline they needed to leave out features that users had come to rely on in the previous version. The makers of Ulysses III, quickly iterated and enhanced the editor over the next year bringing in old features and adding new ones. Because app stores greatly reduce the cost of distribution, developers can get away with this. Often applications will be intentionally brought to market in an unfinished state and users will guide future development through feature requests and usage patterns.

In a way, users of software have become both beta testers and product developers. They try unproven features and provide feedback on usability or bugs. In the Android ecosystem, users also provide developers with data on phones and device configurations that the developer may not have had at her disposal when creating the application. By requesting features and making suggestions, users also guide the design of the product.

Though it is not without it’s problems, the rise of the app store has been a boon for both consumers and developers. This new ecosystem provides enhanced communication, faster development cycles, and stronger products.

Blog
The Best Online Collaboration Tools For Distributed Teams
Blog
Evolving Web Apps Through File Bundling and Minification
This site is registered on wpml.org as a development site.